The highest decision-making body of HIIT is the Board. It decides on HIIT’s overall research strategy and research programmes. The statutory tasks of the Board are to approve the annual budget and activity plans, and follow up and comment on the work of HIIT through regular activity updates given by the Director of HIIT. In 2017 the Board convened 4 times.

The HIIT Board consists of nine members who are appointed for four years at a time. Each university appoints four board members, two of which are university staff and two are not employed by the university, and personal deputies to each of them. The staff of HIIT selects one board member and his or her deputy from among their colleagues. In 2017, the Board consisted of the following members (personal deputies in parentheses):

The Director of HIIT, Professor Petri Myllymäki, is responsible for preparing and submitting propositions to the Board. The Secretary of the Board in 2017 was DSc. Krisztina Cziner. 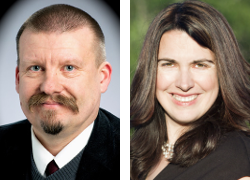