In August 2018, more than 300 computer science researchers, practitioners, and students from all over the world gathered in Helsinki. ALGO is a premier event in algorithmics featuring the European Symposium on Algorithms and co-locating with 6 specialized conferences and workshops (IPEC, WABI, WAOA, ALGOCLOUD, ALGOSENSORS, and ATMOS). The event is organized annually at the end of summer, and this year it took place at Aalto University from the 20th to the 24th of August. ALGO 2018 attracted an all-time record number of participants since the birth of the event.

Algorithms are a key engine in modern data science. With the growth of data size nowadays, the need for algorithmic innovation has become more important than ever. ALGO conferences feature contributed presentations on cutting-edge algorithms designs, engineering, and applications in various areas of studies: sensor networking, biology, economics, and transportation systems.

Besides attracting researchers from topmost institutes in the world, ALGO 2018 was greatly honoured by an impressive lineup of 5 keynote speakers and 5 other invited speakers. The keynote talks addressed the roles of algorithms arising in practical settings, e.g. French college admission and in auctions. 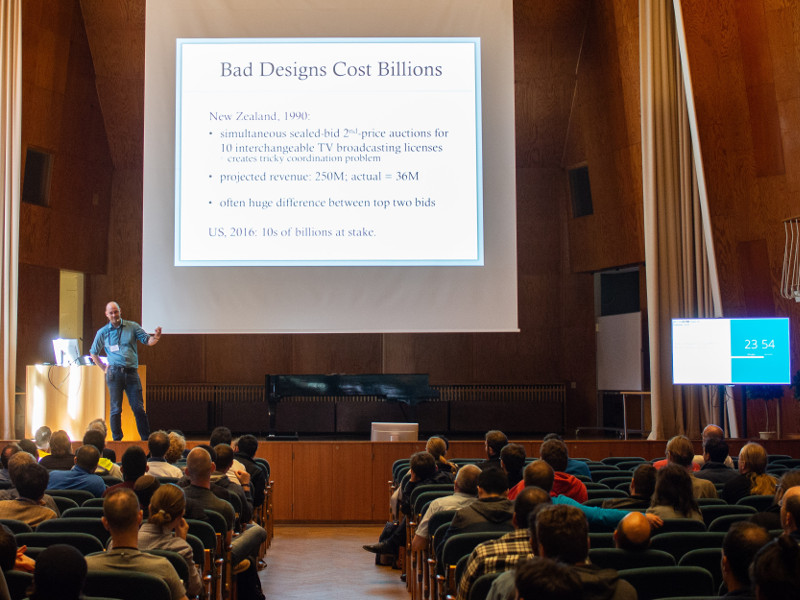 Tim Roughgarden (Stanford University) delivering one of the keynote lectures on how computer science techniques played a crucial role in the field of economics.