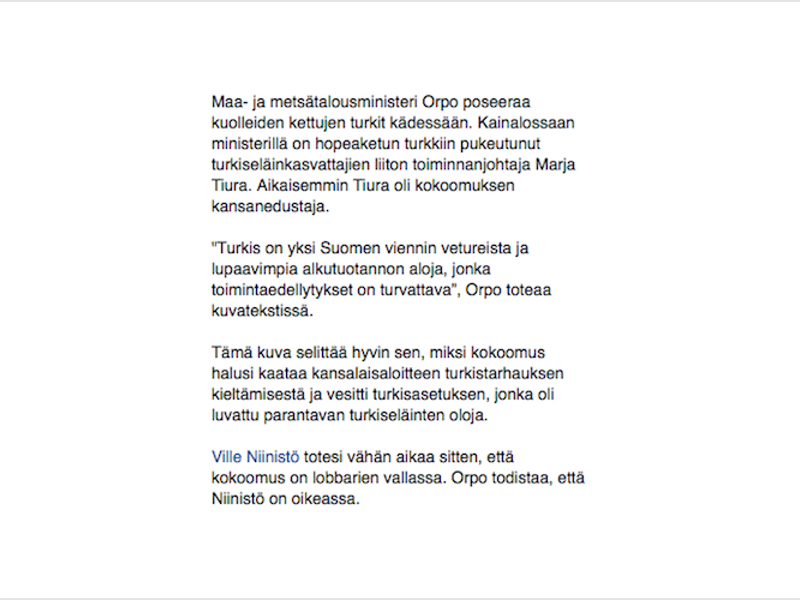 Based on an extensive online material, researchers showed that social media interaction between the candidates of different parties can be aggressive and have an accusing tone. They gathered data on the social media activity of the candidates of the parliamentary election in spring 2015 and combined the online ethnographic observations made during the election campaign with a computational big data analysis. The total amount of data gathered was 1.2 million individual posts or comments. The recently published article focused on candidates’ conversations on Facebook walls, of which a sample of 137 000 messages were analysed.

‘When we were making ethnographic observations, we noticed that the candidates also commented on each other’s posts a lot, but there is little knowledge about the structure of such conversations between candidates in the social media,’ says Matti Nelimarkka, Researcher at the Aalto University Department of Computer Science and Helsinki Institute for Information Technology HIIT.

‘Something that really stood out was the way the candidates kept sniping at their rivals. Candidates were as if in a virtual name-calling competition that reminds you of the rap battles in hip hop,’ says Salla-Maaria Laaksonen, who conducts research on the online public space at the University of Helsinki.

They examined the phenomenon by studying the emotional content or sentiment of the messages with the help of computational text analysis. When candidates of the same party interacted on Facebook, the interaction was mainly positive. The interaction between candidates of different parties, on the other hand, more often had a negative tone. These messages highlighted the rivals’ errors, bad behaviour or incorrect statements. The intention seemed to be to slander the rivals, make oneself look better on the expense of the opponent, or even shame the other candidate or the candidate’s party.

‘A dialogue between candidates of different parties often followed when the criticised candidate started to defend himself or herself. Often, the messages also travelled from one media to another. For example, the conversation about a topic that had been brought up in a blog, in a news article, on television, in advertising or in a separate event was continued in the social media,’ continues Nelimarkka.

Although there was very little communication between candidates in the entire material consisting of one million messages, the arguing between candidates seemed to attract an audience. Sniping attracted more likes than a neutral discussion on Facebook, and candidates were active in responding to the accusations that were made.

‘Perhaps it was easier for candidates to ignore a question raised by a voter than a message from a rival accusing them of something. However, these verbal battles in which candidates have a go at each other are one proof of how social media changes campaigning for elections: online arenas form a large continuous election panel in which candidates try to beat rivalling candidates and opinions,’ says Laaksonen.

According to the researchers, this analysis highlights the need to combine qualitative methods with the analysing of large data masses. Without an understanding about the content of the materials, it is difficult to ask the right questions or interpret the computational analysis correctly.

‘The next areas of application in combining big data and ethnography could be commercial. For example, brand building or media events could combine both an ethnographic and a computational perspective, in which case we would not be trying to attract just clicks or reading the occasional message,’ Nelimarkka says in the end.

Digivaalit 2015 study was conducted by Aalto University Department of Computer Science as a representative of the HIIT research unit and Communication Research Centre CRC from the Department of Social Studies at the University of Helsinki. The study was funded by the Helsingin Sanomat Foundation and Kone Foundation.