This is the fourth lecture of Helsinki Distinguished Lecture Series on Future Information Technology.

The event is open for everybody. Registration (for logistic purposes): https://elomake.helsinki.fi/lomakkeet/43119/lomake.html

The lecture is followed by cocktails.

I shall discuss recent work on some central problems in Evolution that was inspired and informed by computational ideas. Considerations about the performance of genetic algorithms led to a novel theory on the role of sex in Evolution based on the concept of mixability, while a natural process on Boolean functions can help understand Waddington’s genetic assimilation phenomenon and the emergence of novelty.  Finally, we point out a surprising connection between evolution of a species and the multiplicative weights update algorithm. 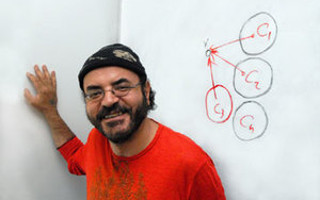 Christos Papadimitriou is a Professor in the Computer Science Division at the University of California, Berkeley, United States. He received his B.S.in EE from Athens Polytechnic, 1972, a M.S. in EE and Ph.D. in EECS from Princeton, 1974 and 1976 respectively. He is the C. Lester Hogan Professor of EECS. Professor Papadimitriou taught at Harvard, MIT, Athens Polytechnic, Stanford, and UCSD before joining EECS at UC Berkeley January, 1996.

In 2001, Papadimitriou was inducted as a Fellow of the Association for Computing Machinery and in 2002 he was awarded the Knuth Prize. He became fellow of the US National Academy of Engineering for contributions to complexity theory, database theory, and combinatorial optimization. In 2009 he was elected to the US National Academy of Sciences. In 2012, he, along with Elias Koutsoupias, was awarded the Gödel Prize for their joint work on the concept of the price of anarchy.