Aalto Distinguished Professor Erkki Oja gives his IEEE Frank Rosenblatt Award lecture “at home” in Otaniemi also. The lecture is free of charge and open to everyone. The lecture will be followed by an informal cocktail event starting around 4pm. For catering purposes, we ask you to register by 13 September.

Unsupervised learning is a classical approach in artificial neural networks, pattern recognition and data analysis. Its importance is growing today, due to the increasing data volumes and the difficulty of obtaining labeled training data of sufficient quantity and quality, that could be used for supervised learning. The talk looks at the basic approaches during the past forty years, especially from the perspective of learning neurons and neural networks. A widely used methodology is linear latent variable models, such as principal component analysis, independent component analysis, and nonnegative matrix factorizations. They can be implemented in one-layer neural networks or shallow autoencoders. Mathematically, they can be represented as decompositions of the data matrix containing the unlabeled samples. In deep learning, nonlinear latent variables can be found by deep autoencoders. Another widely used classical methodology is clustering, which also has a relation to matrix factorizations. In self-organizing maps, the clusters are ordered in a specific way. 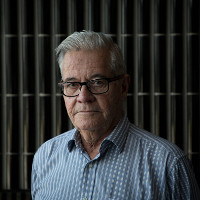 Erkki Oja received the D.Sc. degree from Helsinki University of Technology in 1977. He is Past Director of the Computational Inference Research Centre and Distinguished Professor Emeritus of Computer Science and Engineering at the Department of Computer Science, Aalto University, Finland. He holds an honorary doctorate from Uppsala University, Sweden, as well as from two Finnish universities. He has been research associate at Brown University, Providence, RI, and visiting professor at the Tokyo Institute of Technology, Japan, and the Universite Pantheon-Sorbonne, France. He is the author or coauthor of more than 300 articles and book chapters on pattern recognition, computer vision, and neural computing, and three books: “Subspace Methods of Pattern Recognition” (Research Studies Press and Wiley, 1983), which has been translated into Chinese and Japanese; “Kohonen Maps” (Elsevier, 1999), and “Independent Component Analysis” (Wiley, 2001; also translated into Chinese and Japanese). His research interests are in the study of neural networks and unsupervised machine learning, especially principal component and independent component analysis, self-organization, statistical pattern recognition, and applying machine learning to computer vision and signal processing. Much of this work is highly cited.

Prof. Oja is a member of the Finnish Academy of Sciences, Finnish Academy of Technical Sciences, the Academia Europaea, Life Fellow of the IEEE, Founding Fellow of the International Association of Pattern Recognition (IAPR), Past President of the European Neural Network Society (ENNS), and Fellow of the International Neural Network Society (INNS). He is Past Chairman of the Finnish Research Council for Natural Sciences and Engineering and Commander of the Order of Lion of Finland. He is a member or past-member of the editorial boards of several journals and has been in the program committees of several recent conferences. Prof. Oja is a recipient of the IEEE Computational Intelligence Society Neural Networks Pioneer Award, the IAPR P. Devijver Award, the INNS Hebb Award, and the IEEE Frank Rosenblatt Award.