In kidney exchanges, patients with kidney disease can obtain compatible donors by swapping their own willing but incompatible donors.  The clearing problem involves finding a social welfare maximizing set of non-overlapping short cycles.  We proved this is NP-hard.  It was one of the main obstacles to a national kidney exchange.  We developed the first algorithm capable of clearing these exchanges optimally on a nationwide scale.  The key was incremental problem formulation because the formulation that gives tight LP bounds is too large to even store.  On top of the branch-and-price paradigm we developed techniques that dramatically improve runtime and memory usage.  Furthermore, clearing is actually an online problem where patient-donor pairs and altruistic donors appear and expire over time.  We first developed trajectory-based online stochastic optimization algorithms (that use our optimal offline solver as a subroutine) for this. Such algorithms tend to be too compute-intensive at run time, so recently we developed a general approach for giving batch algorithms guidance about the future without a run-time hit.  It learns potentials of elements of the problem, and then uses them in each batch clearing.  I will share experiences from using our algorithms to run the UNOS US-wide kidney exchange and two regional ones.  We introduced several design enhancements to the exchanges.  For one, we used our algorithms to launch the first never-ending altruistic donor chains. I will present new results – both theoretical and experimental – on the role of long chains.  I will also discuss planning that is robust against last-minute execution failures.

The talk covers material from the following papers: 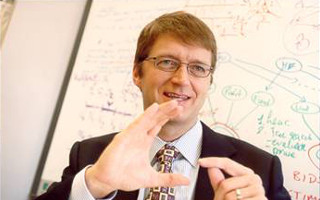 Dr. Tuomas Sandholm is Professor in the Computer Science Department at Carnegie Mellon University.  He has published over 450 papers on game theory; electronic commerce; artificial intelligence; auctions and exchanges; multiagent systems; automated negotiation and contracting; coalition formation; voting; search and integer programming; safe exchange; normative models of bounded rationality; resource-bounded reasoning; machine learning; and networks.  He has over 20 years of experience building optimization-based electronic marketplaces, and has fielded several of his systems.  He was Founder, Chairman, and CTO/Chief Scientist of CombineNet, Inc. from 1997 until its acquisition in 2010.  During this period the company commercialized over 800 large-scale generalized combinatorial auctions, with over $60 billion in total spend and over $6 billion in generated savings.  Dr. Sandholm’s algorithms also run the US-wide UNOS kidney exchange. His new startup, Optimized Markets, Inc., is focused on advertising markets.  Since early 2009, he has been the design consultant of Baidu’s sponsored search auctions; Baidu’s market cap increased 5x to $50 billion during this period due to better monetization.  He has also served as consultant, advisor, or board member for Yahoo!, Google, Rare Crowds, Granata Decision Systems, Netcycler, and others.  He has applied his game-solving algorithms to develop some of the world’s best poker-playing programs.  He holds a PhD and MS in computer science and a Dipl. Eng. with distinction in Industrial Engineering and Management Science.  He is recipient of the NSF Career Award, the inaugural ACM Autonomous Agents Research Award, the Alfred P. Sloan Foundation Fellowship, the Carnegie Science Center Award for Excellence, and the Computers and Thought Award.  He is Fellow of the ACM and AAAI.