This is the sixth lecture of Helsinki Distinguished Lecture Series on Future Information Technology. The lecture is organized jointly with the Aalto Brain Centre (ABC).

The event is open for everybody. Registration (for logistic purposes): https://elomake.helsinki.fi/lomakkeet/46585/lomake.html

The lecture is followed by cocktails.

Brain Computer Interfacing makes use of brain signals for the control of objects (e.g., wheel chairs), spelling, computer gaming, and other applications. This talk will provide a brief overview of current Brain Computer Interface technology. In particular, it will show the wealth, complexity and difficulties of the data available. The challenge is enormous: Neuro-electric activities provide a high dimensional, very strongly noise contaminated data stream. This data stream needs to be processed and decoded accurately and in real time, so that (metaphorically speaking) thoughts can be translated into actions.

The talk will then report in more detail about the Berlin Brain Computer Interface that is based on Electroencephalography (EEG) signals, and take the audience all the way through the processing chain. Finally, Brain Computer Interfacing application examples ranging from clinical studies where ‘locked-in’ patients achieve communication to non-clinical applications where, for instance, complex cognitive states while driving a car are analyzed, will be presented. 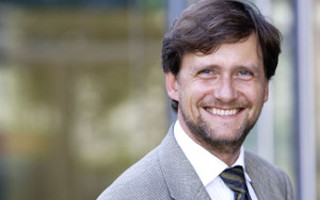 Klaus-Robert Müller is Professor of Computer Science at Technical University (TU) Berlin and Director of the Bernstein Focus on Neurotechnology Berlin. Since 2012, he also holds a Distinguished Professorship for Neurotechnology at Korea University, Seoul. He studied physics and obtained his PhD in Computer Science at TU Karlsruhe in 1992. Starting in 1995, he built up the Intelligent Data Analysis (IDA) group at GMD FIRST (later Fraunhofer FIRST) and served as department head until 2008. He was also a Professor at University of Potsdam from 1999-2006. He was awarded the Olympus Prize by the German Association for Pattern Recognition DAGM in 1999, and the SEL Alcatel Communication Award in 2006. In 2012 he was elected to be a member of the German National Academy of Sciences – Leopoldina. His research interests are intelligent data analysis, machine learning, signal processing and Brain Computer Interfaces.