Finland is one of world’s leading countries in information and communications technology. Helsinki has a long history of ICT. Did you know that Nokia is a Finnish company or that the Linux system was created by the Finnish Linux Torvalds? Finland believes in open source. The principles of My Data, which aims at a people-centered data economy, have also been developed in Helsinki. 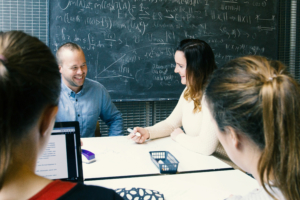 Finland scores the highest index in EU´s Digital Economy and Society Index. Finland also has the highest number of ICT professionals in Europe.

Finland is often being called world’s telecommunications test laboratory. Finns have always been fascinated by novelties and they have received all new gadgets with open arms. Many services and technologies have been introduced in Finland much earlier than in other countries.

In recent years, Finland has grown its thriving startup ecosystem. Helsinki ranks number one in the world in local connectedness among founders, investors and experts. The world’s leading startup event Slush also takes place in Helsinki.

Startup Genome has identified Helsinki area as one of the most significant AI ecosystems in Europe along with London and Berlin. In 2019, startups and growth companies raised a new record amount, totalling €511 million.

The quality of research and education in Aalto University and University of Helsinki is world-class, and the education is practically free as there are no tuition fees for any students in the Finnish university system. Finns are the second most educated nation and the most literate people in the world.

In terms of the living environment, Helsinki has been ranked as one of the world’s top-10 most livable cities (Economist, 2017). Finland is among the best countries in the world with respect to many quality of life indicators, ranking at the top in education and subjective wellbeing. Furthermore, Finland is again the world’s happiest country in 2020 (World Happiness Report, 2020).

Helsinki is located in the heart of the Baltic Sea, between Russia and Sweden. You can fly from Helsinki to New York in 8 hours, as well as to Beijing.

We warmly welcome all ICT Researchers and Experts to join our Helsinki ICT community!